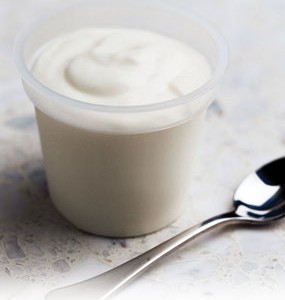 Pregnant mothers are in a dilemma.  You want to nourish your baby, stay healthy, and not go crazy trying to keep up with everything around the house.  You need fast, healthy, tasty foods that won’t take away from your busy schedule.  You’re bombarded by images of delicious desserts on T.V., but your doctor said you should avoid junk food during pregnancy.  Then another commercial comes on;  it’s for a low-fat yogurt that’s the same flavor as the treat on the previous commercial.  Since everyone says yogurt is healthy, why not have your cake (or cake flavored yogurt) and eat it too?

You pop open a low-fat yogurt and enjoy it’s flavor, and congratulate yourself on avoiding that bowl of ice cream.

I know, this might seem contradictory to the advice of your doctor who says you need lots of dairy to build strong bones for you and your child.  As is often the case, your doctor hasn’t done his homework.  We have.

A new study has shown mothers who consume low-fat yogurt increase the chances their offspring will have an overactive immune system.  The children of women who ate low-fat yogurt during pregnancy were 1.6 times more likely to have asthma by age seven.  They were also more likely to have rhinitis, chronic infections, and display symptoms of asthma before it fully developed.

Since some of aging can be attributed to chronic infections, eating low-fat yogurt is not good for you either.

Milk and other dairy products have proteins that can be extremely allergenic. When the mother consumes dairy, she is sharing those proteins with her unborn (or nursing) baby as well.  Babies are meant to consume mother’s milk, not cow’s milk.  Your baby’s immune system is still developing.  When she is fed low-fat yogurt (in utero) her immune system overreacts.  These allergies can become worse as the baby grows older, eventually becoming a serious problem.

However, not all dairy is created equal.  As this study showed, the protein in dairy is the main problem.  The fat in dairy is extremely healthy.  That’s why removing it was a bad idea, but I suspect that the addition of powdered nonfat milk to low-fat yogurt is a contributor to the allergies.  There are some children who don’t respond well to any form of dairy, but most can handle a good stick of grass-fed butter after they’re finished weaning.  My children both eat grass-fed butter almost as if it was a candy bar.  Processed dairy also contains hormones, synthetic compounds, sweeteners, colorings, and antibiotics from the cow.  These chemicals can wreak havoc on a baby’s immune system.

The low-fat yogurt in this study also contained fruit.  The fruit used in yogurt is selected because it wasn’t fresh enough to be sold at a higher price in a store, which increases the likelihood that it contains toxins.   The mold on those fruits produces mycotoxins which can cause numerous diseases.  By eating low-fat fruit flavored yogurt during pregnancy, you may be exposing your baby to mycotoxins as he or she develops.  This can interfere with normal growth and lead to future health problems. Mycotoxins are a major contributor to fertility and pregnancy problems.

Nutrition is confusing enough for regular people – it’s a complete enigma for pregnant mothers.  They get advice from all sides, and feel immense pressure to do the right thing.  That’s why we’ve put our entire knowledge into a simple program for the entire family to follow.  The Better Baby Book tells you what to eat, how to pick healthy foods, and what to avoid.  By following the principles in the Better Baby Book, you can avoid being blindsided by things like low-fat yogurt.  You can trust you’re doing everything right when it comes to the health of your child.

2,014 Comments on "The Scary Truth About Low-Fat Yogurt During Pregnancy"